Range trading is only interesting when markets are relatively calm. Picture for yourself a currency pair with a price development that resembles a little creek, happily meandering back and forth between clear resistance and support levels, without settling itself on a clear direction. As a trader, you could identify those resistance and support levels and pick trade triggers, stop losses and profit targets based on those levels. That is range trading in a nutshell.

THE NUTS AND BOLTS OF RANGE TRADING

Range trading is putting on positions with the intent to profit from temporary ranging movements of a financial product. Altough nothing beats the thrill of being on the right side of a trade when prices explode in break out trading - and the profit per trade in range trading is often less spectacular - your chances of success are much higher with range trading. Check out the next chart to get a quick idea of what range trading is all about.

This is a candlestick chart of the EUR/CHF, an old favorite of range traders, because its price action is so often sidewards. (A notable exception was 2011, when the franc attracted many investors seeking a safe haven after trouble began surrounding the eurozone. This pushed the franc ever higher against the euro, until the Swiss National Bank decided to intervene on the forex)

That example notwithstanding, the usual ranging of the Swiss franc has everything to do with the fact that the Swiss economy is very dependent on the Eurozone (almost all Swiss exports go to the Eurozone). A not surprising fact, given that Switzerland is surrounded by EU countries. This dependence normally ensures a very stable relationship between the two economies and their currencies. 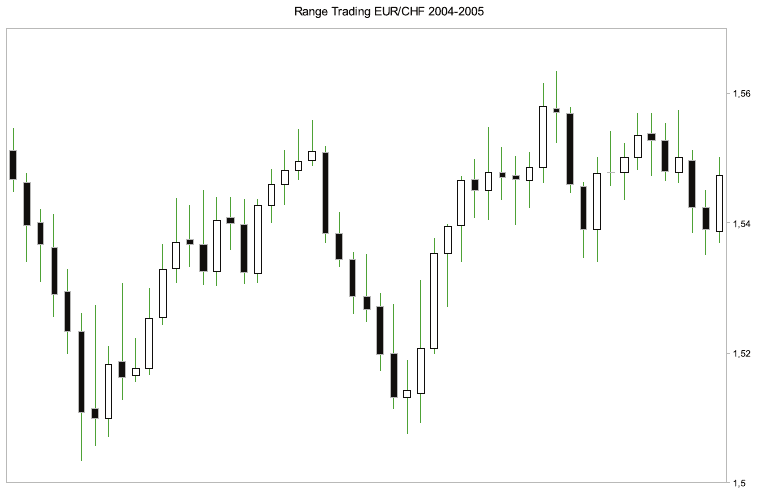 The daily chart of the EUR/CHF usually shows a clear channel. When you've identified this channel, putting on a trade after the bounce back from a resistance/support level has a fairly high chance of success.

Range trading can work equally well in futures trading. Take a look at the next chart, showing the rate of the S&P 500 between January and July 2011on a daily basis. 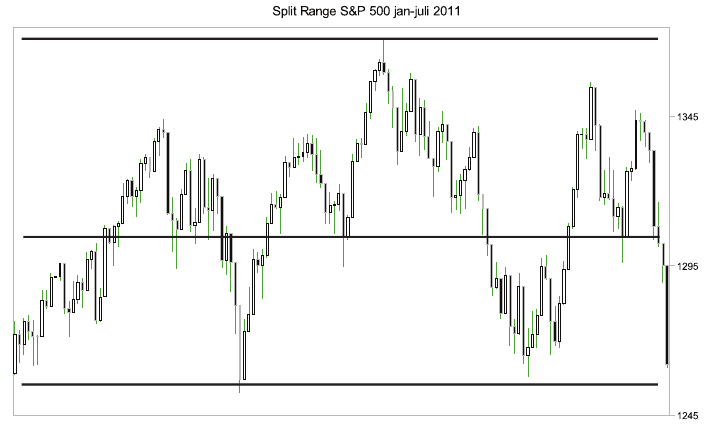 Even though the range lying between the horizontal lines is broken a couple of times, traders can be relatively certain that when the price is within the range, the movement - up or down - will be completed.

HOW TO RECOGNIZE A POSSIBLE RANGE TRADE

1. After a period of volatility there is a greater chance that a ranging movement will be reestablished. Currency pairs often start ranging after a period of volatility due to the split among traders on which direction the pair is going to go. All possibilities are open. Will the price continue in the direction of the breakout or, on the contrary, fall back to the original price level before the breakout. On a candlestick chart this is often visible through what is known as a flag chart pattern. See the next chart for an example of a flag pattern of the USD/CAD.

3. The greater the interdependency between the economies that are underlying the currencies of a given currency pair, the bigger the chance that such a currency pair will often have ranging price action. Think for instance about the EUR/CHF and the Swiss export that mostly goes to the Eurozone.

4. Study earlier periods of a specific currency pair on a chart. Was there much ranging going on? And if so, what was the bandwith of the ranging movement? And how long did it remain in place? This kind of information can help you make a quick estimation whether or not a new range is forming for the currency pair.

HOW DO YOU SET UP A RANGE TRADING STRATEGY

To set up a succesful range trading strategy you have to go through a couple of steps.

Identify the entry point for the trade (a.k.a the trigger)

A good entry point for a range trade is the first candle that brings the price back within the channel again, after it had broken through first. Should the price break through that same resistance/support again, after you put on the position, the stop loss would eject you from the trade. Your job when formulating a working set-up for a range trade is to find an entry point where all the lights are green for go, where your risk exposure is minimal and your chances of successs optimal.

Put your stop loss somewhat past the high point/low point that the price reached earlier, when it broke through the resistance/support. Remember, your hypothesis is that the price will start ranging again; should it break through that resistance/support level again, to reach an even higher higher/lower low, your hypothesis would have been proven wrong and you should exit the trade.

Don't chase the breakout when your stop loss is triggered

It can be very tempting to open a position that trades the supposed breakout which triggered your stop loss. The idea in this case would be that the triggering of your stop loss by definition constitutes a breakout. This is nonsense of course, but to some traders being stopped out by what looks to be an explosive breakout is more than they can bear. And of course it seems that the quickest way to regain the money you lost on the position would be to catch the wave of that (possible) breakout. It would also be the stupidest way. For while it's always possible that you have been stopped out by a genuine breakout, in most cases you'll simply compound losses by half-heartedly trading a breakout that could easily turn out to be a false breakout (in fact, it will be most of the time). Therefore, once you have set-up a range trade, it's better to take a step back when you have been stopped out and have another look at what the most likely price development will be.

Available at Amazon
and other stores